The Life of Riley and Jake! 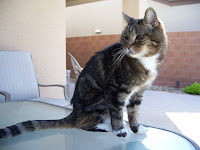 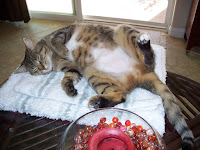 Riley in her most comfortable position!
This story comes from Kris B. in LasVegas, Nv. Thank you Kris for taking in a little lost kitty and giving it:
"The Life of Riley"
A little more than a year ago, I had dropped my husband off at the airport, and was coming home. It was dark as I slowed down for our drive-way. I caught a glimpse of a kitty in a neighbors yard, and thought it was our 17 yr old cat, Jake, sitting there. I wondered how he got outside! I quickly parked, and jumped out and started calling "Here kitty, kitty". A small gray tabby cat came running...it wasn't Jake, though. She was very anxious for me to pet her and was obviously a stray...skinny and dusty. My first thought was "I don't want another cat". Jake, the old guy, wasn't going to be with us much longer, and I honestly was looking forward to no litter box! But I thought I would feed her and try to find her owner in our neighborhood. You see, we live in an area with lots of new homes and construction, and there always seems to be lost cats and dogs. I brought out a dish of food and fresh water, and she devoured it. I left her outside, and went to bed. She was slinking around the front courtyard in the morning, and was happy for more food. I took a picture of her and emailed it to a partial neighborhood list, hoping I would have luck in finding her home. One woman did come, thinking it was her lost cat. It wasn't, but she said she'd take her home anyway. I thought "Good! The kitty has a home, and the family has a kitty!". But the next day, there was the lost kitty again, outside the front door. I don't know if she got away somehow, or if the woman put her out. Anyway, I kept feeding her outside, and implored all my friends "Don't you want a sweet kitty?". No takers. All of this went on for about 2 months, and it was beginning to get pretty cold at night. The kitty curled up in a spot under a small bush in our front yard when she slept. I put an old blanket by the door, but as far as I know, she didn't use it. Anyway, John and I finally accepted the fact that she had found a home...she knew it, but it took us a while to figure it out. We brought her in the house. She was a bit skittish at first, and Jake wasn't happy at all. Our pug, Spanky, also wondered "What the heck!". I took her to the vets to get shots & spayed, and was surprised to find out that she had already been spayed. Of course, we still had to pay the cost, because the surgery still happened. And she went through the surgery twice in her life...poor thing! It took us a long time to name her....I just couldn't think of one that fit. Then, one day I was telling a friend about her story, and said she now lives the "life of Riley". Eureka! So Riley it is. I've sent a picture of her in her favorite sleeping pose. I've never had another cat that sleeps like this, but she looks pretty content and happy, doesn't she? I've also added a picture of old Jake, one that was taken his last morning, sitting on the patio. I lovingly took him to the vet right after taking this picture. He was 18 yo, and was not having an easy time any more. So now he's in kitty heaven. And Riley is now our kitty, with a sweet personality and funny quirks.
Posted by Kathy at 9:34 AM 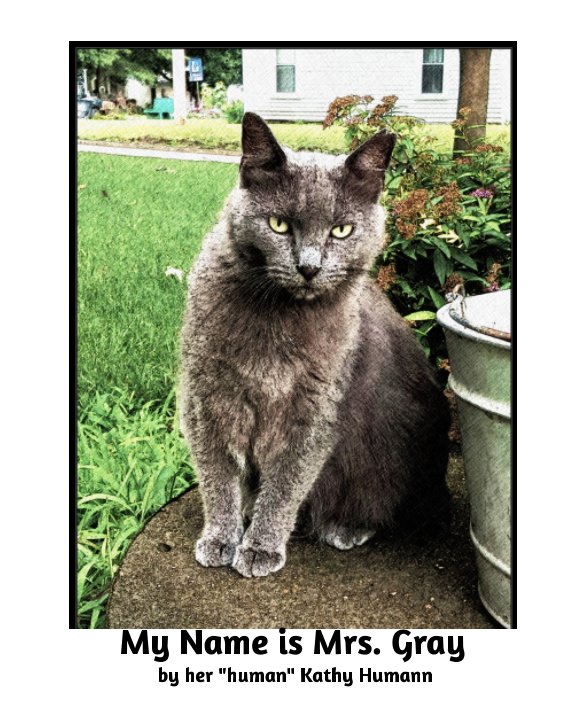